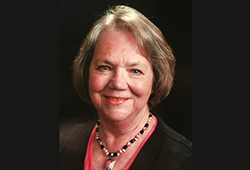 Your gift can connect to your fondest memories, like Susan O'Rourke BS '66.

As a retailing major, Susan O'Rourke BS '66, had no idea how connected she'd be to RIT history. She spent her RIT college years on the downtown campus, and got a preview of what was to come for the university, a time that came full circle 50 years later.

"RIT had a small student body back then, and I studied under Edwina Hogadone [the first female dean at RIT and the first female dean of a college of business in the country]," says Susan. Hogadone impressed on all the female students that they were representatives of RIT to the city residents around them.

Looking back at that pivotal time for the university, Susan found that her student experience intersected with RIT's history on a few other occasions. She and two of her roommates were charter sisters of Alpha Sigma Alpha in 1964. In the sorority's membership book, she is listed as member number 17, and the chapter is now up to more than 700 women. Susan admits she didn't realize the significance back then.

As a further witness to RIT history, she and her sorority sisters were asked to design the basement for their house on the residence quad, and she and two other classmates hoisted the first flag on the Henrietta campus. In the summer of 1966, the three of them were chosen to hold out the huge flag as it was raised on the campus flagpole for the first time, and were featured in the local news. She even found a spoon from the Rochester Hotel, the precursor to the men's downtown dorm.

Susan met her husband, Harold O'Rourke BS '66, at the end of their sophomore year. He was in the printing program, a Sigma Pi brother, and they started dating the winter of their junior year. She reconnected with RIT for her 50th reunion in 2016, after Harold had passed away. She toured the "new" campus, and was excited to visit the Wallace Library. She spoke to RIT archives staff, read the first copy of the 50th anniversary book on the campus, and visited the Cary Collection for the first time. She was interested to see the Collection as her husband had come from the graphic arts world, and was surprised to see her beloved husband's image of 140 typefaces hanging in the Cary.

Connecting to history is a passion she's developed as an antiques dealer living in the historic Williamsburg, Virginia area. But seeing her husband's print on the wall made her first visit to the library even more special. She also noticed a print from the book Graphic Communications through the Ages hanging on the wall demonstrating Chinese block printing. She had a board used for block printing in her personal collection, and her first gift to the library was this antiquity that is several hundred years old. The Cary Collection staff are in the process of having it mounted to hang next to the print.

"Libraries and these collections are for everyone," says Susan. "So much of my connection to RIT doesn't exist anymore – the downtown campus, the retail school, those professors and deans. But I feel a deep connection to the library because of the things in their collection that connect me to my husband and to our time at RIT. It's so wonderful that RIT is able to use these collections for students and scholars."

And yes, she gave that Rochester Hotel spoon she found to the RIT museum.

Download our free guide to the Qualified Charitable Distribution